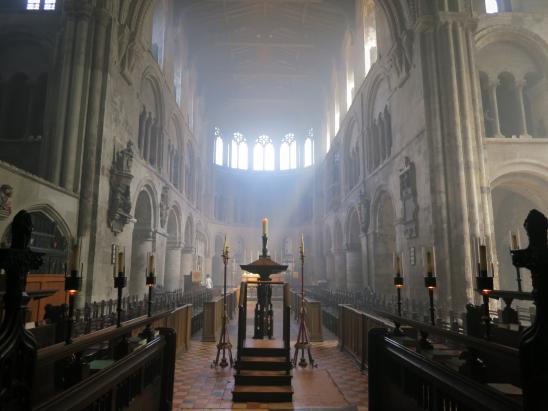 The Bible in Medieval Sermons: Part I for Understanding the Top Ten Bible Verses in Medieval England

My husband recently noted in his Facebook series on local church highlights in Waco, TX, (yes, we live–literally–in the middle of the Fixer Upper world) how modern Protestants characterize the Medieval church as keeping people from the Bible. I have talked about medieval views of the Bible on this blog several times, including “Banning the Bible: Did it Really Happen in the Medieval Church?,” “The English Bible before the Reformation,” and my last post “The Top Ten Bible Verses in Medieval England.” Just to sum up (in case you don’t want to reread all my previous blogs), medieval people did have access to the Bible and the medieval church actively encouraged Christians to know the Bible. In fact, as I have previously suggested, medieval people may have known their Bible better than many modern Christians.

But I haven’t talked much about how medieval people learned their Bible.

The Bible really was everywhere in the medieval world. It permeated daily life, from ordinary conversations to household art to education, entertainment, law, and even the calendar. The medieval world was a oral culture built on the memorization of text, a “passive literacy” as Robert Swanson has called it. This is vastly different from our modern world. We rely more on written texts; we take notes on sermons when we want to remember points. Medieval people memorized what they wanted (and needed) to remember. Maybe think of it like a universal Awana program (a scripture memory program for kids). Instead of just your children memorizing scripture and reciting it weekly (as my daughter does every Wednesday night), medieval men and women were encouraged to memorize large portions of the psalms and biblical prayers and even Gospel texts. (Of course, the medieval program was not nearly as organized as the modern Awana program…)

The 9th century noblewoman Dhouda, for example, instructed her son to memorize psalms to pray and recite throughout the day. As she wrote, quoted by Frans van Liere, “the path to Jesus is shown in the sacrifice of divine praise, for when we pour forth compunction in the singing of Psalms, we prepare in our hearts the road by which we come to Jesus…There is nothing in this mortal life by which we can fasten ourselves to God more closely than by the divine praise of Psalm singing.” Dhuoda wanted her son to learn his psalter so he would find Jesus.
One of the main reasons people knew their Bible, however, was not through their 10-minute daily quite time (this is a joke, btw….). It was through hearing the Bible preached in sermons. As van Liere writes, “Preaching was one of the most widespread, frequent, and well-attended activities of the medieval church, especially during the later Middle Ages.” Anne T. Thayer likewise reminds us that preaching was the “‘mass media’ of the day since it was foundational to the broad dissemination of ideas for centuries.” And, of course, Eyal Poleg explains that “sermons presented the laity with biblical texts in languages they were able to understand.”

Preaching really mattered for learning the Bible in medieval Europe. My Baylor colleague Tommy Kidd has shown us that celebrity preaching was a significant part of early American Christianity with preachers like George Whitefield. But did you also know it was a part of the medieval world? van Liere reminds us of the medieval celebrity preacher Bernardino of Siena, a fifteenth-century observant Franciscan known for his enthusiastic emphasis on Jesus and his ability to attract large crowds. Once his sermon so excited his audience that they cried “Jesus, Jesus, Jesus!” for hours after he finished preaching.

Here is a quick crash course in late medieval English sermons and their inclusion of biblical text.

1. Late medieval English sermons were frequently thematic. And by thematic, I mean the medieval definition–not modern. For medieval, thematic meant centered on a biblical or liturgical passage. The sermon would explain the major points (called divisions) of the passage (the theme), expound on those points, and often end with a sermon story or two (exempla).

2. The biblical text of the theme usually followed the liturgical calendar. Indeed, sermons were either temporale (followed the annual cycle of liturgical seasons–Advent, Christmas, Lent, Easter, Pentecost, Ascension Sunday, Trinity Sunday, Corpus Christi) or sanctorale (followed the annual cycle of saint feast days). Within church settings, sermons were usually preached during the Mass–after the Gospel readings and before the celebration of Holy Communion. The Gospels and Epistles, the most common medieval lectionary readings, were–as Eyal Poleg has commented–also the most common biblical text to appear in sermons–including passages from Matthew, Mark, Luke, John, Acts, Romans, 1 & 2 Corinthians, Galatians, Ephesians, Philippians, Colossians, 1 Thessalonians, Titus, Hebrews, James, 1 & 2 Peter, 1 John, Revelation, Exodus, Isaiah, Jeremiah, and Joel. Everyone, of course, would have known their psalter (Psalms). Just FYI, in England, a common liturgy and lectionary used was the Use of Sarum (Salisbury). I have included a picture of the foundations of the old Sarum Cathedral and the “new” Salisbury Cathedral.

3. Biblical allusions and quotations outside of the theme and beyond the lectionary readings were included throughout sermons. Scripture from almost every book of the medieval Bible appear in Late Medieval English sermons. As van Liere explains, sermons were “based on Scripture, and were intended to explain Scripture or to communicate scriptural content to their audience.” After giving the theme “the preacher was free to touch on a wide variety of other Bible passages and verses.”

4. Aside from the liturgical calendar, there were some general guidelines about the inclusion of biblical text. The goal of late medieval vernacular sermons was to instruct in the faith (catechetical), so the scripture emphasized was often that which illuminated important aspects of medieval faith for Christians (such as the life and death of Jesus, the importance of fides ex auditu–I will talk more about this next time, the Creed, the Lord’s Prayer, the Ten Commandments, the vices and virtues, etc.). Medieval priests were discouraged from expounding too much on the trickier theological texts so as not to confuse ordinary parishioners.
So what does this all mean? The scripture included in late medieval English sermons wasn’t exactly “dealers’ choice.” It was based on the lectionary readings, but it did branch out to include biblical text beyond the Gospels and Epistles. The purpose of scripture in sermons, however, was not just to teach the Bible but also to teach the basics of medieval faith. Medieval people really were expected to know their Bible, and hearing sermons would have been one of the most common ways that they would have learned it. As Eyal Poleg has picturesquely described, the Bible in medieval sermons was Jacob’s Ladder–the foundation on which medieval preachers built a staircase to heaven.

Now you have the background to better understand the Top Ten Medieval Bible verses. So stay tuned for next time as we discuss God’s sovereignty vs. human responsibility medieval style.