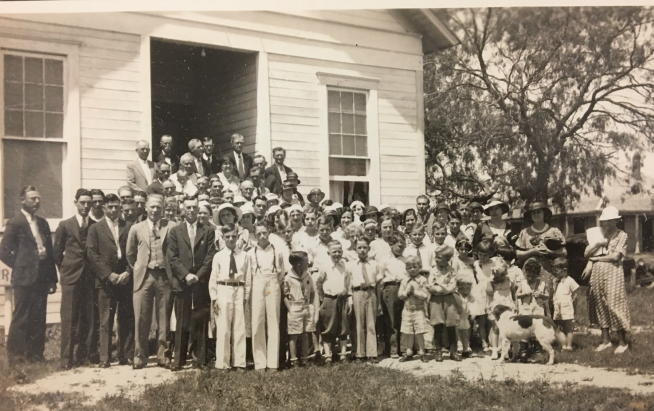 An Ordinary Preaching Woman in a Texas Baptist Church, c. 1930

In a 2006 interview, Wayne Grudem argued that female leaders in the church (especially pastors) are disobeying God’s word and thus open to “the withdrawal of God’s hand of protection and blessing.” As Grudem explained:

“A woman who serves as a pastor, preaching to both men and women, is disobeying the word of God. There are always negative consequences to that.”

Female leadership, Grudem argues, leads to an erosion of orthodoxy in churches–including misinterpretation of scripture and lack of trust in the Bible–and an erosion in proper family roles–including lack of male leadership and gender identity confusion among children. He then provided a specific example of a female preacher who suffered the loss of God’s protection in her life. “Judy Brown…contributed a chapter to Discovering Biblical Equality. She was an Assemblies of God pastor of maybe Foursquare, I’m not sure. And she actually, sadly, is in prison in Virginia for attempted murder. It’s tragic.” When the interviewer asked if Wayne Grudem thought “her situation is related to her views about women preaching,” his answer was clear: “in this case it seems to me there’s an area of disobedience to the command of scripture regarding male leadership and teaching in the church.”

In my last post I suggested that conservative evangelicals are often ignorant of the long history of female leaders and preachers in Christian past. And the female preachers they do know about are often viewed as negative examples. Like Wayne Grudem’s story about Judy Brown, female preachers are the feminist boogeymen (women?) who lead Christians down the slippery slope of gender confusion and even try to murder male pastors by beating them with crow bars (see Judy Brown’s story on the CBMW website).

World magazine, when reporting on the Brown story cautioned readers that “it would be wrong to generalize from this case to make conclusions about all evangelical feminists or all female Pentecostal preachers.” But, at the same time, it emphasized the connection between feminist theology and serious sin. After describing the Brown story as a “lurid mix of feminist theology, homosexuality and attempted murder,” the article concluded that the Judy Brown case “is more evidence-as if we needed any more–for total depravity and the mystery of iniquity.”

While I certainly can’t contest the legitimacy of tragic stories like Judy Brown, I can contest such stories as normative. The historical record is full of healthy churches who support female leadership, allowing both women and men to fill their pulpit.

Baptists, for example, have supported female preachers since the seventeenth-century. Baptist historian Carolyn Blevins writes that (pp. 294-6), “the earliest reference to a Baptist female preacher in America was to Catherine Scott, who influenced Roger Williams to establish the first Baptist Church in America in Providence, Rhode Island, in 1639.” Free Will Baptists ordained female preachers in the early 19th century, followed by American Baptists in the later 19th, Canadian Baptists in the early 20th, and (finally) Southern Baptists in 1964. Blevins admits that “women did not hold positions of ministerial leadership in proportion to their membership.” Yet she still demonstrates that female leadership has been a consistent part of Baptist history.

“Exercising the freedom of Baptist theology and amid much diversity, Baptist women repeatedly worked to serve God and their society in spite of the resistance they often faced in their own denominations. Their contributions to Baptist life range from the pen to the pulpit and from their homes to the other side of the world.”

I recently stumbled across a fabulously ordinary story in my own hometown of a Baptist church with a long history of supporting female leadership. First Baptist Church Elm Mott, about 10 minutes from Baylor campus, was founded in 1879 with 19 charter members. Like many Baptist churches founded in this era, women played prominent roles in church organization, in Sunday School leadership (teaching both children and adult classes), and as elected church officials. “Aunt” Mary Christian helped found the church in 1879 and remained an active member until her death in 1930. Mrs. Netti Christian (“Aunt Not”) and Mrs. Rose Teat served for so long as Sunday School teachers that they received the designation “long term” Sunday School teachers. Mrs. S.A. Teat was elected church clerk in 1923, a position held by both men and women, and continued as clerk into the 1930s. Ira Hix, who later married longtime church member Harold Stovall, was elected music director in 1945 (she had first served as assistant music director in 1934). Women were regularly elected as messengers (representatives) to the Waco Baptist Association, such as Mrs. Burney McKerral and Mrs. S.A. Teat in 1934, regularly elected as church officials, such as Miss Mozelle Murphy who served as Bible Training Secretary and later Assistant Sunday School director, and led prayers during services, such as Mrs. Kenslo and Mrs. W. A. Varner who led two different prayers during the April 30, 1939 service. Modern evangelical concerns about female leadership simply do not appear as a concern for FBC Elm Mott. Indeed, Hay Battaile remarked in 1936 that: “if the male members had been as busy, as energetic, and as much in earnest as the women of our Church, it would be difficult to tell what would have been the result…May God richly bless the work of our women.”

While I have not found evidence of women serving as deacons in FBC Elm Mott, women have filled the pulpit. From 1934 to 1938, Mrs. Lewis Ball of Houston was asked at least three times to help preach church revivals. In July of 1934, the church minutes record: the deacons recommended that “the church ask Mrs. Lewis Ball of Houston to assist us one week during our coming revival, she being a great inspiration and an outstanding Soul winner.” Mrs. Lewis Ball not only had charge of the morning services and delivered evening messages for the young peoples’ prayer meeting at the 1934 summer revival, but she preached to the largest crowd yet recorded at FBC Elm Mott: an audience of 139. At least 6 people professed faith in Jesus after her sermon, “Is it Well With Your Soul?” 16 baptisms resulted from the revival overall. Mrs. Lewis Ball proved such a popular preacher that she was asked to return in 1935 and again in 1938. She received no pay for her services, but the church gave her gifts including a “pounding” in 1935.
This preaching woman from Houston, Mrs. Lewis Ball, marks an ordinary event for this Texas Baptist church. The deacons wanted a good “soul winner” who could reach their young people. Business meeting records provide no hint of controversy about extending a preaching invitation to a woman. As the church minutes stated, Mrs. Ball was “a great inspiration to the young people” and “exceptionally successful as a soul-winner.” So she was invited to speak at a summer revival.

The historical records about Mrs. Lewis Ball and the revivals at FBC Elm Mott are held at the Texas Collection at Baylor University.