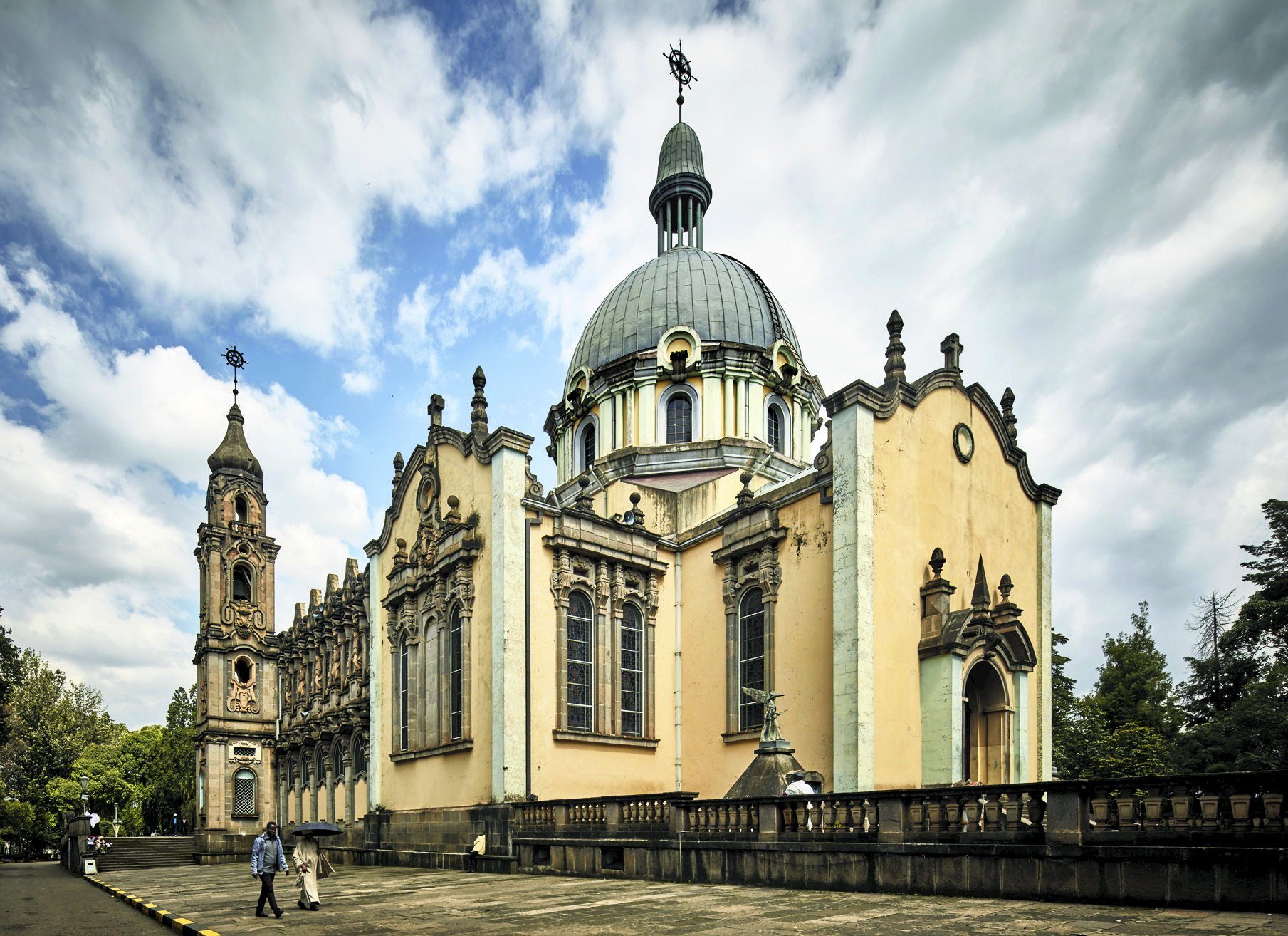 Today I am pleased to welcome Anna Wells to the Anxious Bench. Anna is a second-year Ph.D. student in the Religion department at Baylor University working with Dr. Carlos Cardoza-Orlandi. Her research focuses on the way culture influences the development of Christianity and looks specifically at female hagiographies from medieval Europe and Ethiopia through a comparative lens. I have to add I had the privilege of directing Anna’s Master’s thesis, which I featured in my 2018 post The Myth of Biblical Womanhood. Her post today provides a more in-depth look at how medieval Ethiopian Christianity matters for women.

Scholars frequently discuss the global reach of Christianity today, as evidenced by studies like the one conducted by the Pew Research Center. This global perspective contrasts sharply with how we imagine the history of Christianity. Today–Christianity is global. But in the past, especially the medieval past, Christianity was European (and maybe the shrinking Byzantine empire). Yet, in his book Lost Christianities, Philip Jenkins explored the existence of Christian communities in Africa, Asia, and the Middle East prior to the spread of Islam beginning in the seventh century. Christianity in the past was just as global as Christianity in the present.

It is time for modern Christians to understand the significance of our global history.

Ethiopia is a great place to start. According to the historian Rufinus, King Ezana of Aksum (Axum), an early kingdom that preceded Ethiopia, converted to Christianity in the mid-fourth century. Christianity has been entrenched there since this early date. We have lots of evidence showing this, including coins bearing the image of the cross from King Ezana’s reign. He intentionally placed the cross on the coins he minted–denoting “the importance that Christianity had in the kingdom.” Yet, because of theological differences and the rapid spread of Islam across northern Africa, Ethiopian Christianity developed in relative isolation from other Christian communities.

Western Christians often forget this. We forget that Christianity has existed in Africa for even longer than it has in much of western Europe.
But just because we forget about it doesn’t mean it didn’t happen.

Christianity had a significant presence in Ethiopia in the medieval period and a wealth of literature exists beginning in the thirteenth century. Most of these documents were written in Ge’ez, the liturgical language of the Ethiopian Orthodox Church. (Think Latin for the Roman Catholic Church).
One of these documents contains a collection of saints’ lives known as the Book of the Saints of the Ethiopian Church (also the Synaxarium or Ethiopian Senkessar). Originally copied from Coptic sources, the Book of the Saints included saints from the Bible and the earliest days of Christianity as well as Coptic holy men and women. As the text made its way into Ethiopian churches and monasteries, local scribes added the stories of Ethiopian saints and holy men and women to the text. The resulting document quickly gained a distinctly Ethiopian viewpoint. Priests typically read the saints’ lives for a particular day from the work at the end of the liturgy, making the stories familiar and available even to those who did not have access to the text. The daily saints’ lives presented in the Book of the Saints served as examples of holy living and devout faith to Ethiopian Christians.

I’d like to share one of my favorite stories from the Book of the Saints found on the twenty-fifth day of the month of Miyazya. It is about a woman named Sara, and I doubt it is a story familiar to very many of you.
Saint Sara and her husband Socrates both believed in Christ. Socrates served as the governor of Antioch during the reign of the emperor Diocletian (r. 284-305). Out of fear of Diocletian, her husband denied his faith, but Sara remained a Christian. The couple had two sons, and Sara wanted them to be baptized. She was unable to baptize them in Antioch because of her husband and the emperor, but she was willing to go to any lengths to have her children baptized due to her love for Christ.

Sara boarded a ship bound for Alexandria with her two sons so that the Archbishop Peter could baptize them. According to the text, God caused a violent storm to blow up in order to display her faith for future generations. The ship was about to sink and Sara feared that her young children would drown without baptism. After a long prayer, she cut her breast and, using the blood from her wound, made the sign of the cross on her sons’ foreheads, hearts, and backs. Then she dipped both of them in the sea three times in the name of the Father, and the Son, and the Holy Spirit.

Almost instantly, the storm dissipated and the family arrived safely in Alexandria. Sara took her sons to the archbishop to be baptized with the other children from the city. And then something amazing happened. When Archbishop Peter attempted to baptize her sons, the water congealed on the boys’ foreheads and fell off. He tried to baptize another child and the water remained liquid, so he tried to baptize Sara’s sons again. The archbishop tried three times to baptize Sara’s sons, but the water congealed each time. He couldn’t baptize them. He then questioned Sara, and she confessed everything she had done on the ship during the storm. She asked him to forgive her sin, because she was afraid that she had baptized her sons herself.

After listening to her story, the archbishop realized what had happened. He couldn’t baptize her sons because they had already been baptized. So the archbishop comforted Sara, telling her that when she baptized her children in the sea, it was truly Christ who baptized them. The baptism that she, a woman, had performed was efficacious.

When Sara and her sons finally returned to Antioch, her husband was furious because she had baptized their children. He reported her to the emperor who questioned her about her trip to Alexandria. Sara refused to answer him and he martyred her along with her sons.

First, Sara chose to remain faithful to her beliefs in the face of persecution even though her husband denied Christ. She considered obedience to Christ as more important than obedience to her husband.
Second, the archbishop recognized Sara’s baptism of her sons as valid, especially after he was unable to baptism them himself. Only those ordained by the Church had the authority to perform the sacrament–which Sara was not. Despite this, the archbishop acknowledged that Sara’s baptism was efficacious. Christ worked through her female body to baptize her sons.

Yet, I would argue that none of these things are the most remarkable part of the story.

The most remarkable part of the story is buried in a small detail. A small detail that holds great significance.

Let’s look at the story again.

According to the text, God caused a violent storm to blow up in order to display her faith for future generations. The circumstances of the story had not been not an accident. They were ordained by God. Sara’s defiance of her husband, the storm which led her to baptize her children, and the archbishop upholding the baptism as valid had all been by God’s design. Despite the ecclesiastical structures of the time, God allowed Sara to baptize her sons and made her faith stand as a witness for future believers, both women and men.

So much of the controversy regarding women and their role in the church focuses on the Western context. In a similar collection of saints’ lives from medieval Europe, Jacobus de Voragine’s Golden Legend, almost every female saint is a virgin. The text presents only one option for what it means to be holy as a woman. Yet when we expand the narrative geographically, we find a different story. The Ethiopian Orthodox Church in the medieval period still operated with a highly patriarchal system, but the stories it tells about women allow for them to participate in the faith through a variety of roles.

Saint Sara was a wife and mother and the story of her faith served as an example to other Christians. Indeed, the Ethiopian text tells us that God wanted us to know her story–to display her faith for future generations. God wanted us to know that this woman defied both her husband and ecclesiastical structures to carry out the will of God.

As Beth Allison Barr continues her Disrupting Christian Patriarchy series (you can read the latest installment here), let us keep in mind the evidence from Christian communities outside of the West. Because it isn’t only western Christian history that disrupts Christian patriarchy; global Christian history does it too.