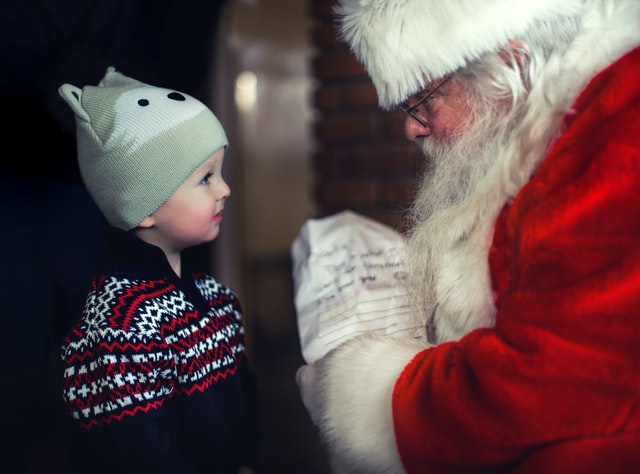 Bringing the Spirit of (Medieval) Santa Back to Christmas

Every Christmas in the yard of a house not far from us stands a manger scene. The Christ Child rocks gently in his small white wooden manger; his halo glowing from the spotlight. Instead of Mary and Joseph gazing at their holy infant, or even angels surrounding the yard with praise, an unlikely figure stands next to the makeshift cradle. Santa Claus kneels before the baby Jesus.

I confess the first year I saw Santa genuflecting before Jesus, I totally laughed. It seemed (at the time) such a forced reconciliation of a cultural (secular?) tradition (Santa) with the spiritual significance of Christmas (the birth of Jesus). I kept this attitude, laughing all the way, for several years. A 2013 poll by Pew Research suggests I wasn’t alone with my attitude towards Santa. Only 28% of the Protestants polled included pretend visits from Santa in their Christmas Eve celebrations, and this is even despite that 75% had grown up with the Santa tradition. The poll also showed that the younger the age of parents, the less likely they were to include Santa in holiday celebrations.

In other words, Santa seems to be falling out of favor with Christians.
But should we leave Santa out of Christmas? I am not so sure anymore.
First, I think as Christians we have to understand that we created the celebration of Christmas. Hang on. Don’t stop reading. When I argue that Christians created the commemoration of Christ’s birth, I am not arguing that Christians created the birth of Christ. Of course I believe that Jesus was born, fully God and fully human, to the Virgin Mary. But was he born on December 25th? Even my son, at a rather young age, told one of my friends that Christmas probably wasn’t the real birthday of Jesus. (This was one of my early never-ending lessons that kids repeat everything they hear…oh well…) The truth is we don’t know when Jesus was born. Gerry Bowler, in his 2016 Oxford book Christmas in the Crosshairs (recently reviewed by my colleague Thomas S. Kidd) underscores that December 25 was a choice made by the early church. It was a reasonable choice that probably had nothing to do with paganism (see Bowler p. 7). It was also a controversial choice, as many preferred the date of January 6 and some even argued that Christians shouldn’t commemorate birthdays at all (even the birthday of Jesus). But, by the 6th century, December 25 as the liturgical celebration (mass) of the birth of Christ (Christ-mas) was a choice that had been firmly made by the Christian community and entrenched in the Christian calendar. It seems quite fitting to me that Bowler entitled his first chapter in Christmas in the Crosshairs as “The Inventors.” Christmas as a celebration of the birth of Jesus was invented by Christians.

Second, when we understand Christmas as an intentionally created celebration, we are more tolerant of cultural changes and accretions. For example, sermons in medieval England emphasized a Christmas tradition that Jesus was born at midnight. Why? To medieval Christians, midnight represented the darkest time (literally) and the time of greatest peace (everyone was sleeping). Hence, Jesus was born at midnight to show he was the “prince of peace” (came at the time when the world was most at rest) and to emphasize Jesus as the light of the world: “Christ was born at midnight and turned the darkness of night into daylight” and thus brought light to all trapped in the darkness of sin. Jesus born at midnight made perfect sense to the dark nights of pre-modern people. To modern Christians with electricity and much more erratic sleep patterns, emphasis on midnight as the exact time of Christ’s birth resonates less well and (not surprisingly) is less emphasized (although you can still find it in Christmas carols).

Which brings me to Santa. Santa is certainly a cultural accretion to Christmas. Gerry Bowler, in Santa Claus: A Biography, has traced the evolution of Santa from the 4th century Turkish saint to the jolly round elf with flying reindeer. Santa today is often controversial, especially for Christians. A 2014 blog on The Federalist argues that Santa and Elf on the Shelf should be eliminated from Christmas to reduce stress: “Few things have detracted more from the meek but miraculous, ancient but astonishing story of a babe in a manger than a jolly fat man stuffing gifts down a chimney and an uncanny elf spying on kids.” Santa is seen as deflecting from Jesus, as putting emphasis on material gifts and commercialism rather than on the celebration of our Savior’s birth. Many would probably see Santa and his gift-giving as an important reason why (according to the 2013 Pew Research poll) that “fully eight-in-ten non-Christians in America” celebrate Christmas but see it more as a “cultural holiday rather than a religious occasion.” Bowler includes a great quote from a modern Santa critic: “Santa can be called the ‘Grinch’ who stole genuine Christmas traditions and replaced them with the goofy, giddy and glitzy” (p. 143).

To my medieval ears, however, I can’t help but think that our modern problem with Santa is that we have forgotten what he really represents.
In the world of medieval England, St. Nicholas was not celebrated at Christmas; he was celebrated before Christmas on December 6. His story emphasized a man who gave his riches to help those in need, especially children. A fourteenth-century Middle English sermon explains that “Saint Nicholas is highly praised” because of his “great compassion.” It then tells the most famous story about St. Nicholas: a father desperate to save his family from poverty decided to send his young daughters into prostitution. “When Nicholas heard of this, he had great compassion on them; and one night, he secretly cast gold in a bag through a window into the father’s chamber. In the morning when the man found the gold, he was so glad and with the gold he (arranged) the marriage of his eldest daughter.” St. Nicholas continued his nightly visits, secretly giving bags of gold two more times to enable the marriage of all three daughters. Hence was born the medieval Santa: a benevolent gift-giver who, because of his great compassion and love of God, helped those in need, especially the young.

Indeed, just as medieval sermons emphasized Jesus as bringing goodwill to the world, St. Nicholas was emphasized as bringing goodwill to families.
It seems rather ironic to me that this man of “great compassion” whose love of God empowered him to give his riches to those in need is now seen as a competitor to Christ; as a symbol of materialism and greed. In a world growing increasingly cynical about Christianity, it seems that rather than banning Santa from our Christmas traditions, perhaps we would do better by bringing back the spirit of medieval Santa: compassionate giving motivated by the love of Christ.