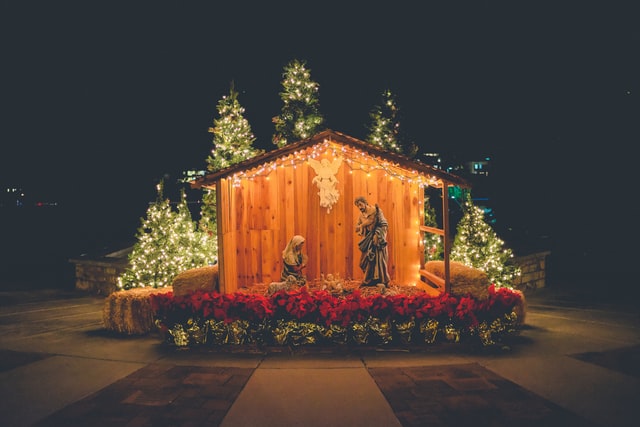 Every Thanksgiving my mother gives me a new nativity set to display. She gets them from the local Fair Trade store, so we now have scenes crafted by artisans in Kenya, Indonesia, Haiti, Guatemala, Vietnam, Peru, Nicagarua, Sri Lanka, Bangladesh, India, as well as the United States. The clean lines and naked beauty of the carved African soapstone contrasts with the vivid fabric colors from Peru. I especially love the set from India; it includes the wives of the Wise Men traveling with their husbands to see the infant Savior.

It is also nice to have a range of cultural representations. Instead of growing up with a baby Jesus who looks just like them, my children glimpse the diversity of our global Christian world just by seeing the diversity of nativity scenes in our home–from the skin color of the Holy Family to the clothing of the characters to even the physical setting of the miraculous birth. Johnathan Merritt noted in 2015 how most American nativity scenes wrongly, harmfully, depict a white Jesus. He quotes from Edward Blum and Paul Harvey’s The Color of Christ how the skin transformation of Jesus into a white baby has made him an “cultural icon of white power.” As they argue, the white Jesus “inadvertently reinforces the damaging cultural framework where lightness is correlated with purity and righteousness, and darkness is linked to sin and evil.”

This is one of the reasons I love Fair Trade nativity scenes. From the Maasai stable with long-legged sheep to the ebony trio from Kenya, Jesus truly appears as the messiah for all the people of the world. But as a medieval historian, I also know that cultural representation (especially skin color) is not the only change that has occurred in nativity scenes. Let me tell you about two other changes I find rather interesting.

The first has to do with the Holy Family. One pervasive similarity I find in modern nativities is the depiction of Joseph. He usually is prominent in the scene, mostly standing upright beside Mary. He is her partner at least in this part of the miraculous event, and often his taller form gently surrounds mother and child–protecting as well as marveling. Would you have guessed that this is different from many medieval depictions?

In medieval Europe, Joseph often takes a much less prominent part in the scene. Take for example British Library MS Egerton 2781, a fourteenth century English Book of Hours. While Mary is lying in child bed, with the ox and the ass and the magi adoring the newly-born Christ child, Joseph is off the the side, leaning on his staff and apparently sleeping. Or British Library MS Additional 18196, a fourteenth-century Italian image from a Dominican manuscript. Again Mary sits serenely with the Christ child, watched over by the ox and the ass. A gray-haired Joseph leans on arm, again resting (if not sleeping). In British Library MS Harley 1892, a fifteenth century book of prayers and Gospel lessons, Joseph disappears altogether. Only Mary, the ox, and the ass adore the baby (along with the angels in the sky). Joseph possibly stands in the far background outside of the stable, but (if it is Joseph) he is far removed from the scene. British Library MS Additional 35313, a sixteenth-century Book of Hours, depicts a very similar scene–Mary, Jesus, and angels in a stable sans Joseph.

Whenever you have some spare time, I strongly encourage you to visit the British Library website and visit their images online. Just search for “nativity” and check out the nativity images of their medieval manuscripts. While sometimes Joseph appears in similar ways to our modern nativities, often he does not–he sits, sleeps, leans on his staff, warms his feet, and sometimes disappears altogether.

If you explore these images, you will also see another interesting difference–the addition of a character. Take for example British Library MS Additional 50005. In a very domestic stable, Mary reclines in a bed while Joseph warms his feet by a fire. Of course the ox and ass are there, laying in the grass behind Mary. Mary hands the newly born Christ child to an attending woman–the midwife. Let’s go back to the Egerton manusript. While Joseph is leaning on his staff, fast asleep, Mary is attended by a vigilant midwife kneeling beside her bed. The woman also appears in British Library MS Cotton Nero C.IV, the twelfth-century Winchester Psalter. While Joseph sits at the feet of Jesus, the midwife stands at Mary’s head. In British Library MS Additional 49598 the midwife is even arranging a pillow behind Mary’s head.

But who is she?

According to the second century Protoevangelium of James, a Hebrew midwife and a woman named Salome did indeed assist at the birth of Jesus. While a midwife isn’t named in the biblical story, her presence would have made sense to medieval Christians. Joseph would have found a midwife to help deliver the Christ child, and that midwife would have stayed (perhaps with other women) and attended to both Mary and the baby Jesus. Women in both the ancient and medieval worlds didn’t give birth without calling the midwife. Why would Mary have been any different?

Of course, the different depiction of Joseph and the addition of a midwife to medieval nativity scenes doesn’t matter much. It isn’t surprising that modern Christians, living in a very different world from fifteenth century England, depicted the birth of Jesus differently from us. Indeed, scholars suggest that Joseph’s peripheral role (and sometimes absence) in medieval nativity scenes is an attempt to highlight the divinity of Jesus. Joseph isn’t the father, and so his role is not as important in the story.

Coincidence? Maybe whitewashing the skin of Jesus isn’t the only way we have remade the nativity in our (American, white, middle-upper class, evangelical) image?

Something to think about for sure.