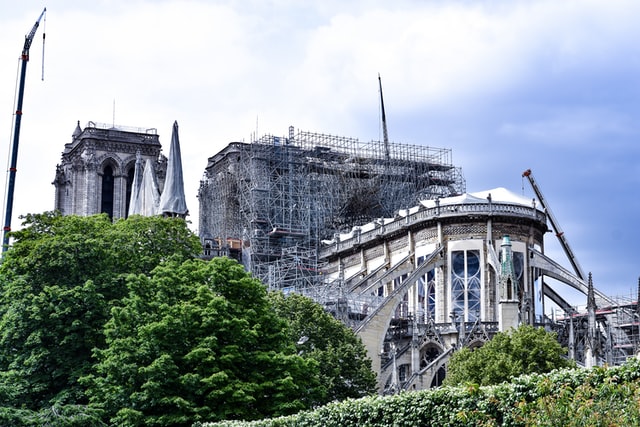 “a fire burnt the whole parish of St. Alkmund’s starting at daybreak on the eve of Pentecost….anno. 1312.”

I was in a meeting with my fellow graduate deans when I first saw the pictures. My colleague just handed me his phone. He said something, but I don’t remember his words as the image drowned out everything else. The small screen connected me to people all over the world and we watched, together, in silence and shock, as fire ravaged Notre Dame.

Notre Dame is the “heart of faith” in Europe, said Cardinal Vincent Nichols, Archbishop of Westminster in England. Constructed across two centuries, from 1163 to 1345, Notre Dame has sat in the heart of Paris for more than eight hundred years. Flying buttresses help its one hundred and forty foot ceiling soar while sunlight streams through the thirteenth-century glass of the rose windows. History and faith, as in so much of medieval Europe, intertwine within its Gothic stone walls. Almost six hundred years after Joan of Arc was burned at the stake, her statute stands tall and proud in the cathedral where she was beatified as a the patron saint of France. Henry VI of England was crowned also King of France here, a mostly empty title for him in the midst of the Hundred Years War. More than three hundred years later, Napoleon Bonaparte would crown himself Emperor of France here, a title which meant a bit more at least for a short while. Here, the bells would ring the end of World War I and World War II….

As I watched the flames engulf the nineteenth-century spire, I could almost see the medieval world. Fire was an ever present reality for both the timber frames of medieval towns and the inner frames of buildings like cathedrals. Just this past summer I was studying a manuscript at the Westin Library in Oxford, Bodleian Library Mansucript Rawlinson D. 1225. It is a medieval liturgical book belonging to St. Chad’s, one of the four parish churches in Shrewsbury, Shropshire. A small note written on the bottom of one of the folios describes a fourteenth century tragedy: “a fire burnt the whole parish of St. Alkmund’s starting at daybreak on the eve of Pentecost….anno. 1312.” The comment was written without much fanfare, but as I watched the fiery spire of Notre Dame crumble and collapse into the burning building, my thoughts strayed to the desperate medieval bodies who would have worked tirelessly on that holy night in fourteenth-century Shrewsbury. They would have struggled to bring water from the river Severn, snaking silver around their town, trying to contain a fire quickly consuming the heart of their town and endangering the lives of their families and friends. Just like the fire of Notre Dame, they would only be partially successful. They would save the town at the cost of a parish. “a fire burnt the whole parish of St. Alkmund’s…..”

Stories of catastrophic fires fill the pages of medieval and early modern history. In 1174, a fire spread from a nearby cottage in Canterbury, England, to the wooden roof of Canterbury Cathedral. The heat was so intense that it melted the roof and caused significant damage to parts of the cathedral. St. Paul’s Cathedral in London burned at least three times in its long history, the most famous of which was the Great Fire of 1666. Although onlookers didn’t have cell phones like in Paris yesterday to capture the fiery tragedy, they did write what they saw. Thomas Vincent tells us, “now the lead melts and runs down, as if it had been snow before the sun,”; Richard Baxter laments the loss of the cathedral library. “the church taking fire, the weighty stones falling down broke into the vaults and let in the fire, and there was no coming near to save the books”; and William Taswell describes, in the aftermath of the fire, the body of an old woman who had huddled against the stone walls of the cathedral to no avail. “Near the east walls of Saint a human body presented itself to me….an old decrepit woman who had fled here for safety, imagining the flames would not have reached her there. Her clothes were burnt and every bone reduced to a coal.

The grief that filled the words of these seventeenth-century men as they witnessed the death of their beloved cathedral echoes in the hearts of all who watched Notre Dame burn yesterday. “Who is not deeply moved by the sight of this great Cathedral in flames?” asked Cardinal Vincent Nichols. “For the people of Paris this is a disaster that touches their very soul. Pray for them.”

We grieve for the loss of a great Cathedral that has shaped the history and faith of France. Yet we also hope for its resurrection.

After Canterbury Cathedral burned in 1174, it was rebuilt with its stunning corona to commemorate the martyrdom of Thomas Becket. After the fire, Canterbury Cathedral became one of the greatest pilgrimage sites in medieval Europe. (Although, I do have to tell you that some scholars think this is exactly why the Cathedral burnt in the first place…..ambitious monks maybe fanned the flames along so they could build the Becket shrine?)

On a less cynical note, fire allowed the medieval cathedral of St. Paul’s in London to be rebuilt with Christopher Wren’s stunning dome that still stands today. And, although much less grand, my favorite place in England is at the Bear Steps next to St. Alkmund’s church in Shrewsbury. It is a fifteenth-century square, probably resurrected from the ruins of the fourteenth-century fire.

Fire destroyed parts of Notre Dame Cathedral yesterday. We can never recover what it once was. Our grief is real, and we should pray for the people of Paris. But history gives us hope for resurrection. As Cardinal Vincent said, “Pray for our desire and determination to rebuild this great Cathedral in the same faith that inspired it over 1000 years ago.” The stone structure of Notre Dame stands despite the ferocity of the flames, and great cathedrals like Canterbury and St. Paul’s have risen from their ashes.
Holy Week is a tragic time to lose the Cathedral of Notre Dame. But Holy Week is also the perfect time to hope for resurrection.

All of my images are from our last trip to Notre Dame in 2017. Stay tuned for the continuation of my Disrupting Patriarchy series.