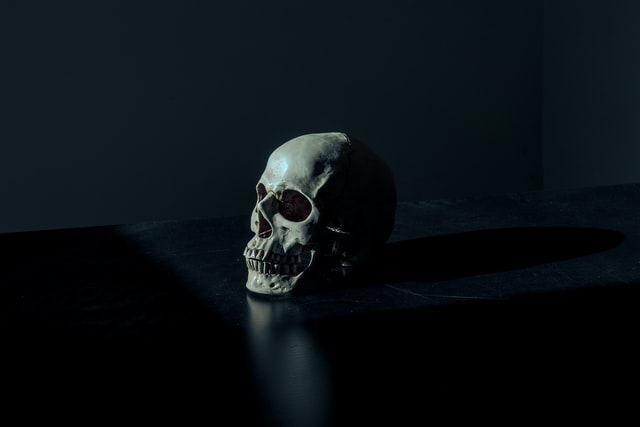 The Modern Roots of Pagan Halloween

I remember trick-or-treating when I was small. The night air was crisp and cool (we lived in the northwest at the time). My little sister was batman, my older sister a ballerina, and I a clown. My dad held our hands as we walked through the neighborhood, returning home only when our plastic pumpkins brimmed with candy. It was a fun night, especially since I didn’t realize until the next day that my little sister had eaten all my M&Ms….
Yet, for Christian families like mine, the idea of Halloween had already begun to change–even as my sisters and I collected our candy. I remember beginning to hear whispers about the dangers of Halloween. My friends told me evil people hid razor blades and poison in Halloween candy and stickers to harm–even kill–little girls like me. Soon, instead of trick-or-treating, we were attending Fall Festival celebrations and Godly-weens (I still cringe at the name!) inside the safe walls of our churches.

The crisp autumn wind which had once carried the excited giggles of costumed children now blew cold and sinister.

Indeed, my childish perception about changing attitudes toward Halloween was correct. My colleague and fellow blogger Philip Jenkins has written about how rising fears in the 1960s and 70s manifested public belief in satanic Halloween rituals and child murder cults. For example, former FBI agent and head of the Los Angeles FBI Tim Gunderson assured his 1980s public that satanic conspiracies both existed and proliferated in the United States. As Gunderson said (quoted in the 1988 The American Focus on Satanic Ritual), “it is a common occurrence for [satanic] groups to kidnap their victims (usually infants and young children) from hospitals, orphanages, shopping centers and off the streets. I have been informed that satanists have been successful in their attempts to influence the Boy Scouts, and in recent years, have concentrated their efforts in recruiting Little League baseball players by infiltrating the coaching staffs and establishing pre-schools throughout the US. A Boise, Idaho, police officer believes that fifty thousand to sixty thousand Americans disappear each year and are victims of human sacrifices of satanic cults. . . . . ”

Seeming to confirm Gunderson’s words, a newspaper story published on Halloween 1987 accused a satanic-cult member of the Southside Slayer serial murders, which had plagued Los Angeles since 1983 (thanks Philip!). Geraldo Rivera also fanned the flames of public belief in satanic murder cults with his documentary Devil Worship: Exposing Satan’s Underground, released (not coincidentally) shortly before Halloween in 1988. Halloween itself was identified as a prime time for lurking satanists to stalk their prey.
Of course, many social factors contributed to the “satanic fears” gripping late-twentieth century Americans and the subsequent growing concerns (especially among conservative Christians) about Halloween celebrations. But one idea surfaces again and again, recycled ad nauseum on websites and in culture war books, assuring us that Halloween is pagan.

It is from James Frazer’s turn-of-the-century work The Golden Bough: A Study in Magic and Religion (or a Study in Comparative Religion as the first version read).

Listen to what Frazer wrote in part VII of Volume I (the Hallowe’en Fires):

“the principal fire-festivals of the Celts, which have survived, through in a restricted area and with diminished pomp, to modern times….were two in number, and fell at an interval of six months, one being celebrated on the eve of May Day and the other Allhallow Even or Hallowe’en, as it is now commonly called, that is, on the thirty-first of October, the day preceding All Saints’ or Allhallows’ Day…the Feast of All Souls at the beginning of November which under a thin Christian cloak conceals an ancient pagan festival of the dead…Hallowe’en, the night which marks the transition from autumn to winter, seems to have been of old the time of year when the souls of the departed were supposed to revisit their old homes in order to warm themselves by the fire and to comfort themselves with the good cheer provided for them in the kitchen or the parlour by their affectionate kinsfolk…But it is not only the souls of the departed who are supposed to be hovering unseen on the day ‘when autumn to winter resigns the pale year.’ Witches then speed on their errands of mischeif, some sweeping through the air on besoms, others galloping along the roads on tabby-cats, which for that evening are turned into coal-black steeds. The fairies, too, are all let loose, and hobgoblins of every sort roam freely about.”

Sound familiar? Halloween is the “ancient pagan festival of the dead”–the liminal night when the dead walk, when the witches ride, when the goblins roam. Just go read anything Pat Robertson has said about Halloween….
Too bad Frazer was mostly wrong. As Cambridge Historian Mary Beard has written, “a large proportion of The Golden Bough is inadequate, as well as irrelevant and (at least in the third edition) monstrously prolix by an reasonable standards of accuracy.”

Too bad Frazer’s argument was also rooted in contemporary ideas about the “illusion” of religion. As E.E. Evans-Pritchard described: “All the leading sociologists and anthropologists contemporaneous with, or since, Frazer were agnostics and positivists….and if they discussed religion they treated it as superstition for which some scientific explanation was required and could be supplied. Almost all the leading anthropologists of my own generation would, I believe, hold that religious faith is total illusion, a curious phenomenon soon to become extinct.”

Timothy Larsen, in his fabulous book The Slain God: Anthropologists & the Christian Faith (which I highly recommend), writes of the irony of The Golden Bough–its theory rejected by scholars yet embraced by the public. “[Frazer’s] work is generally, if not universally, dismissed today by anthropologists, but they are nonetheless saddled with the reality that The Golden Bough is the most popular and influential book in the history of the discipline in terms of its wider cultural impact.” Frazer wrapped his tale about Halloween within his larger theory about the progression of human society, from a world of magic to a world of religion to (finally) a world of science. Modern religious beliefs like Christianity were born in magic (paganism). As he wrote in a 1904 letter to Henry Jackson, “The facts of comparative religion appear to me subversive of Christian theology.”
Frazer’s anthropological arguments, including those about “The Hallowe’en Fires”, had a clear agenda: to undermine religious belief. As Larsen writes: “Frazer frequently made statements to the effect that anthropology was a reformer’s science–that the material he was presenting should prompt people to seek actively to discard those parts of their thinking and culture that he had exposed as arising from faulty logic.”

Reading The Golden Bough should inspire Christians to abandon faith and replace it with science. Why? Because religion inspires violence. “Fundamental to Frazer’s work,” continues Larsen, “is the conviction that the reason why some of the foundational timbers of culture are rotten is because they are soaked in blood. J.G. Frazer viewed much of Western popular culture as thoroughly intertwined with religion; he viewed religion as inherently drawn to violence; and he viewed such violence as typified by a universal impulse in the religious frame of mind toward human sacrifice. The Golden Bough is relentless in this regard. Frazer argues that the Jewish Passover was really a ritual of human sacrifice: the use of a lamb is a modified survival of something much more awful. It is a sly substitution which dupes ‘the bloodthirsty but near-sighted deity’…As for Christianity, Frazer speculates, Christmas was once a festival in which a man was sacrificed ‘in the character of the Yule Boar.’” Frazer warns that this taste for blood and sacrifice, encouraged by modern religions shaped by their pagan pasts, is so strong that it must be intentionally cut away. “Religion will not just naturally die on the vine: it must be purposefully rooted out.
In short, James Frazer wrote The Golden Bough to help push society into its final stage of maturity: replacing religion with science.

Yet it is The Golden Bough, that “most popular and influential book,” on which modern critiques of Halloween and other holidays continue to build. As Philip Jenkins has written (on this blog) about the impact of The Golden Bough: “Still more damaging were claims that key beliefs of Christianity paralleled or plagiarized the common myths of the Middle East, especially those of a dying and rising god. If you follow the comments sections on religious blogs today, it is amazing to see how many commentators still recycle these hoary and long-discredited arguments of early twentieth century Rationalism. Sir James Frazer’s Golden Bough has a lot to answer for.”

Doesn’t it seem ironic that Frazer’s attempt to discredit Christianity has become–whether knowingly or not–a primary resource used by Christians to discredit ‘pagan’ holidays like Halloween?

It certainly does to me.