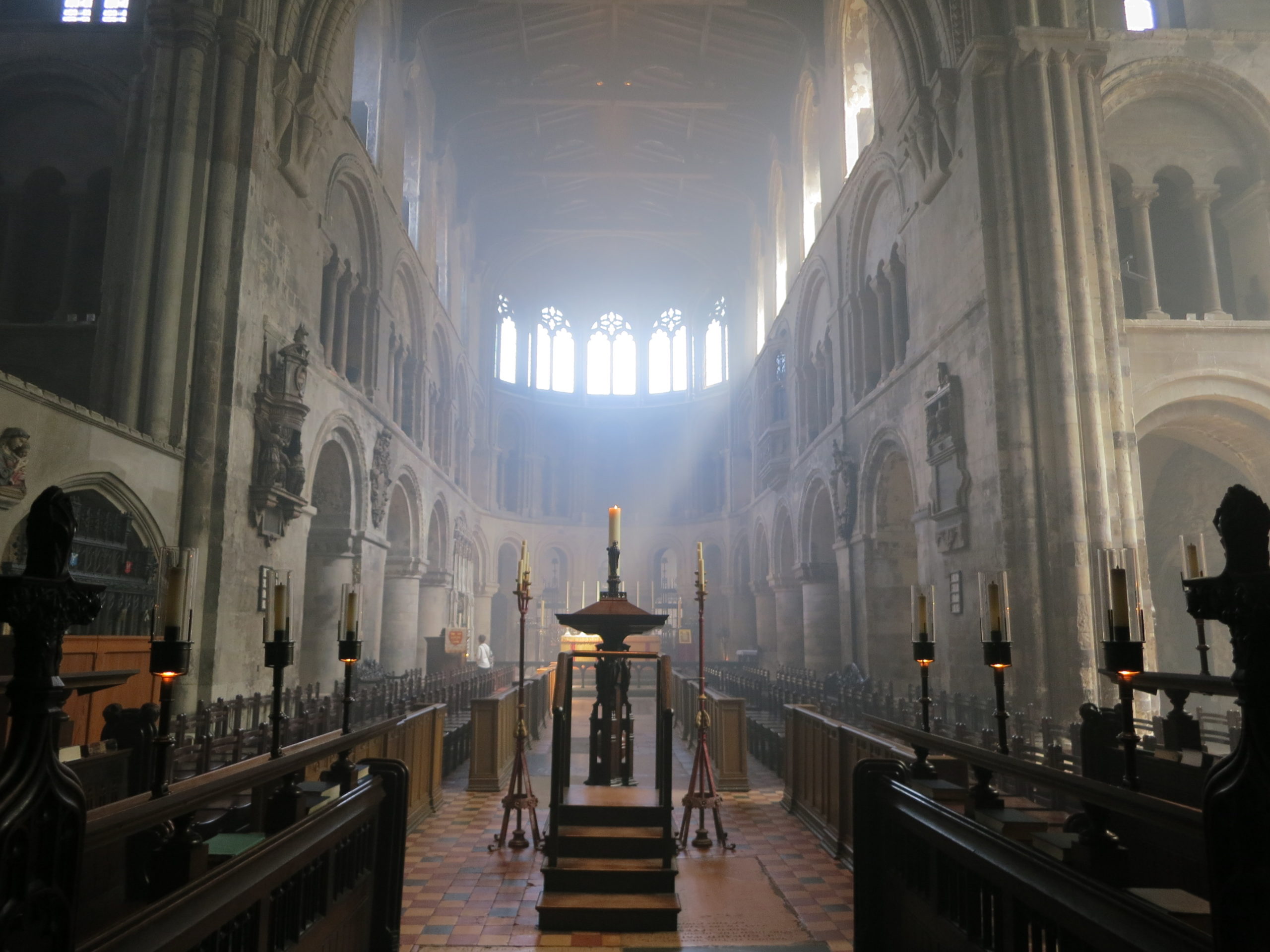 In Eastcheap, near Fenchurch St. in London, stands the medieval church of St. Margaret Pattens. Founded in 1067 and rebuilt by Christopher Wren after the Great Fire of 1666, it slowly lost its congregation. It was closed as a parish church in 1952—more than 900 years after opening its doors. St. Margaret Pattens still offers some weekday services to those working around its urban location. It also remains open to passerbys like me, interested in canopied pews and an 18th-century organ. It is a peaceful space: quiet, beautiful, calm.

It is also is an empty space.

The remains of another medieval church stand close by–St. Ethelburga. Founded around 1250, the church miraculously survived the Great Fire of London and even the bombing of World War I. But it too lost most of its congregation and it eventually became a storage building. After being mostly destroyed by an IRA bomb in 1993, the remains of St. Ethelburga were converted into a center for reconciliation and peace.

I sat for a few moments inside the cool interior of St. Ethelburga. It had once been a bustling medieval church. Now all I could see were peeling walls and broken stones; all I could hear was the silence of its ruined nave. It had become a ghost. The people who had given St. Ethelburga life, who had transformed the stone walls into a vibrant faith community, were gone.
It has been several months since I was in London, yet I keep thinking about these empty London churches.

I know that many factors, including the centuries separating us from the late medieval world, have contributed to their decline. Yet I also know that (ultimately) one reason can explain the emptiness of these medieval churches: people stopped coming.

For modern Americans, empty London churches seem far removed from our world. Indeed, how much in common could we have with St. Margaret Pattens and St. Ethelburga when churches are literally springing up in abandoned grocery stores, school buildings, and even strip malls? Yet we too live in a world where people are leaving churches. A recent 2016 poll by the Pew Research Center states that “the most striking trend in American religion in recent years has been the growing percentage of adults who do not identify with a religious group [23% of the U.S. adult population in 2014 as compared with only 16% in 2007]. And the vast majority of these religious “nones” (78%) say they were raised as a member of a particular religion before shedding their religious identity in adulthood.”

In other words, many of those who self-identify as atheist, agnostic, or describe their religion as “nothing in particular” are ex-church members.

Perhaps even more pointed, a Barna poll from 2014 found that “59% of Millenials who grew up in the church have dropped out at some point.” Overall, the poll found that church attendance has declined from 43% in 2004 to 36% in 2014.

This gives me pause.

A recent study from LifeWay gives me even more pause. Thom Rainer, after studying congregations for 25 years, states that the most common pattern in declining churches is “inward focus.” As he writes: “The ministries are only for the members. The budgetary funds are used almost exclusively to meet the needs of the members. The times of worship and worship styles are geared primarily for the members. Conflict takes place when members don’t get things their way. You get the picture.”

Churches, distracted by fund raising and building projects and arguments over music and predestination, forget that their main job is to be the hands and feet of Jesus. Instead of focusing on the mission of Christ, they focus on themselves. It is not surprising that congregants in these churches struggle with spiritual growth and finding “meaningful work in the church” (the top two reasons, excluding relocation, that adults switch churches).

I can’t help but think about New York City pastor Jon Tyson’s interesting observation that, “The early church leaders didn’t have the things we now consider essential for our faith. They didn’t have official church buildings, vision statements or core values. They had no social media, radio broadcasts or celebrity pastors. They didn’t even have the completed New Testament. Christ-followers were often deeply misunderstood, persecuted and some gave their lives for their faith. Yet they loved and they served and they prayed and they blessed—and slowly, over hundreds of years, they brought the empire to its knees. They did it through love.”

One of the most effective pastors I know in Waco has no church building. He holds office hours in a café; he preaches under a bridge.

Meanwhile, just a few blocks down from the bustling Magnolia Silos (which draw thousands of tourists to Central Texas), an 1895 Presbyterian church, with a clapboard frame and vaulted wood ceiling, stands empty. An investor recently bought it to make it a wedding venue; but so far the restoration price tag is too high.

Just something to think about.